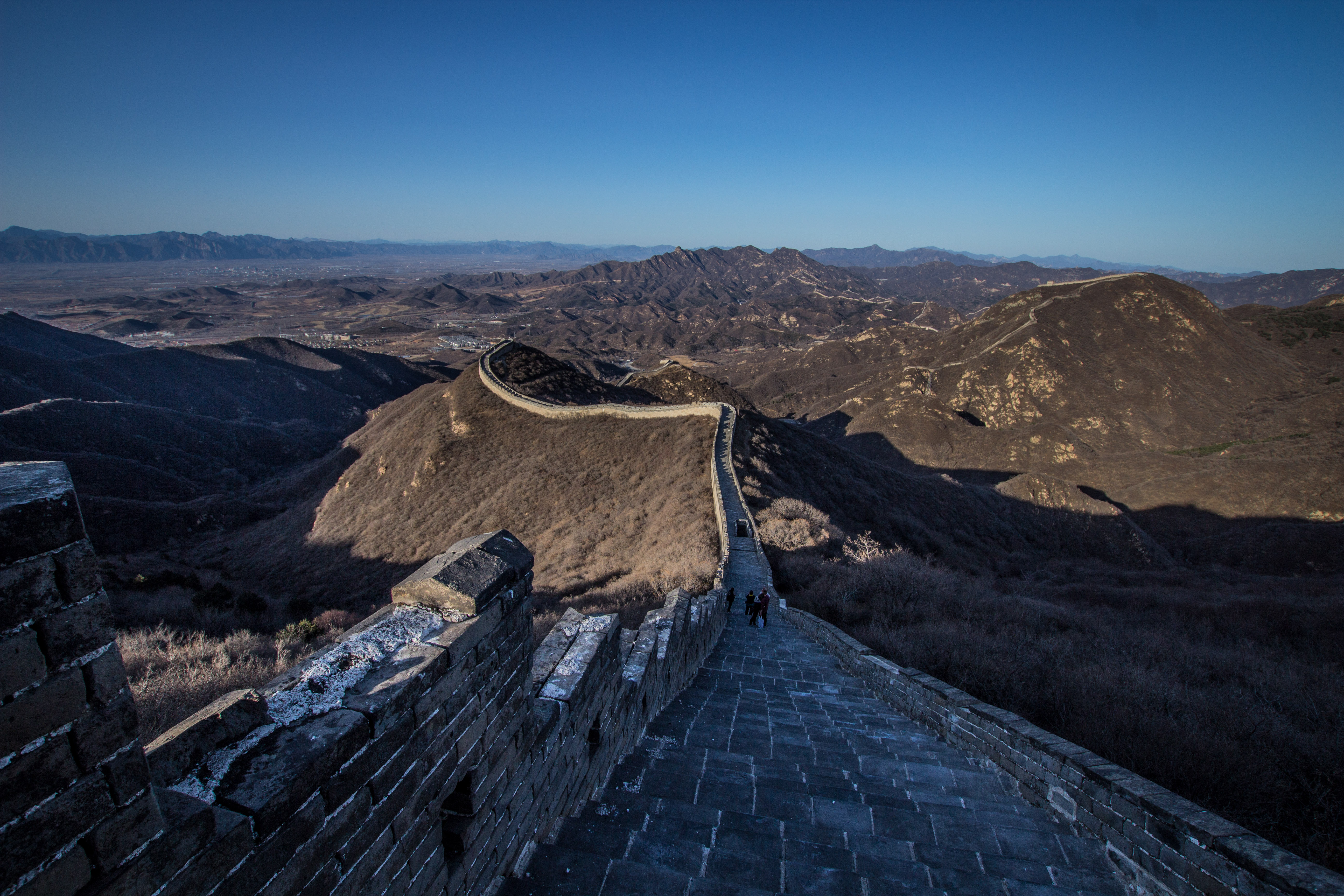 Beijing is famous for the Great Wall, its 2008 Olympic park and of course it’s smog, but we had blue skies throughout! (Almost.)

I’m fairly confident the pollution levels are still higher than they should be, but the sky is blue, there is a gentle wind and it is shorts weather. You literally cannot complain. Apart from the pollution, but we can skim over that.

We spent two days in Beijing, I wasn’t too wowed by this place, there wasn’t a lot to do after you have visited the people’s park by the Temple of Heaven, Tiannemen square and the forbidden city. But we did visit our first fake market, imagine a slightly scruffier John Lewis, and that’s where I am right now, people selling high end jewellery, watches, all sorts of electrical goods, all in these little glass and white wall booths. Like small concessions in JL. At first it’s weird. But after 5 minutes you’re ready to haggle away for a Luis Vitton bag or some new Nike trainers. Neither of which I bought… But there are plenty of options.

The main highlight of Beijing was the Great Wall. One of the wonders of the world. Before I stepped foot on this wall, I wasn’t expecting too much. I’d seen Hadrians wall, this thing is just bigger, and a hell of a lot longer. But I was so over whelmed by the wall, it is ridiculous. The Dragon Trip take you a few hours from Beijing to avoid the tourist heavy areas of the wall… And boy was I glad. I couldn’t imagine a more perfect section to hike. Its a hour or two until sunset so off we go up some of the steepest steps I have hiked, this wall is literally built along a mountain ridge. Insane terrain by foot and they build a 15 foot wall on it! Crazy, just crazy, those Mongolians must have been some mean bastards! If Netflix’s ‘Marco Polo’ is correct they were pretty mean!

The view is of mountains all around, the wall goes on for miles and miles all the way to the horizon and we were the only people there. A whole section of the wall just for us. Nobody else for miles. It was perfect. Now the sun is setting things are getting pretty cold, but the full moon and clear skies means it’s not too dark just yet.

5 o’clock start to see the sunrise on the wall… How many times will I be on the Great Wall of China? Not that many, and if I do ever return, there’s slim chance of the weather being this good. So up I get at 5 splash some water on my face and out we go. By the time the bus gets towards the wall the sky is pretty bright, we’re all a little nervous that we are going to miss it! Then there is a complication at the gate, there is no one to let the bus in and we are still about 1km away! Finally the bus pulls up in the car park, again we are the only ones on the wall, we all race up the wall, climbing massive steps, chests pounding, legs like jelly, I can’t run anymore so decide this spot is as good as any. After all that the sun must be about here… Nope. Turns out, because of the mountains the sun had risen, just not over the mountains, so we wait for 45 minutes in the freezing cold for the sun to actually rise up over the mountains. Worth the wait, but I wish I hadn’t run all that way!

Beijing also brought our first taste for the strange foods you hear about in Asia, We already had the chance to try dog meat in Yangshuo… which I passed on. But here at the night market, we have all the usual victims, scorpions, crickets, and worms, but also sheep penis and testicles, snake, cat, starfish even seahorse. It wasn’t long until we were tucking into sheep testicles. Surprisingly tasty and very juicy… I’ll let you make your own evaluations of that! Sheep penis, has the texture of calamari but with a meaty taste. Silk worm is not something I would recommend trying. They have tough skin which when you break through, the rest of their gooey little bodies explodes in your mouth and if I’m being honest, they taste like shit! I passed on the scorpion but gave snake a go, it didn’t really have a flavour and they are a little tough. I couldn’t bring my self to try the seahorse, those little suckers are too cute. I did, however try a mouthful of cat… I may loose a lot of friends here, but, it was so tasty, kind of like the best chicken you have ever tried. An interesting night, but I’m not sure I will be hurrying back to eat it all again!

The visit to the Olympic park was a quick one, just 20 minutes to take a few photos. the birds nest is pretty impressive.