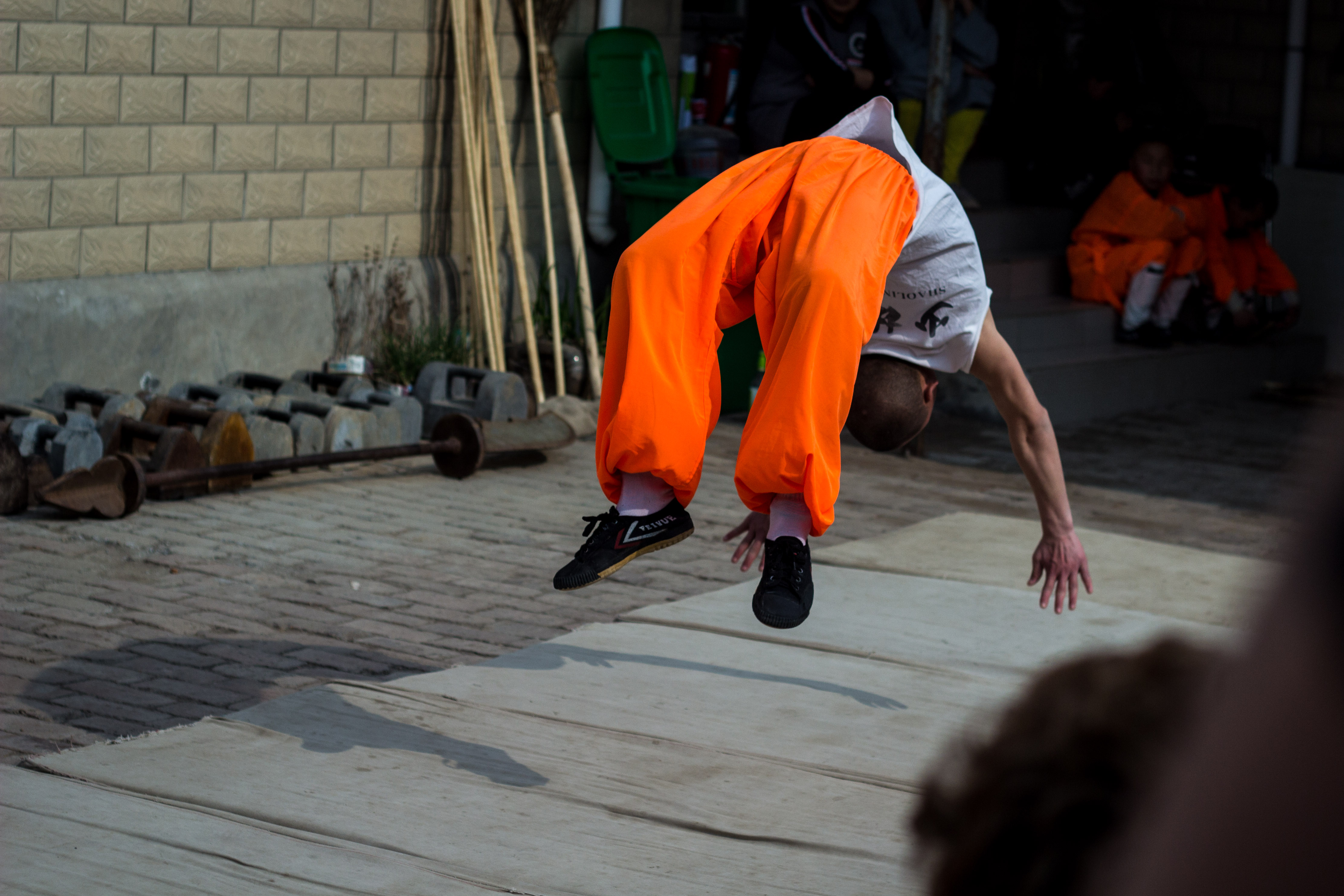 Visiting the home of martial arts brought out my calling in life, and my spirit animal, not a lion, not the famous dragon… the frog of course!

… Maybe not my calling in life, I’m not about to sell all possessions and become a Shaolin Kung Fu monk… but I reckon I have the ability to come close.

6 hours on a cramped coach from Xi’an, we arrive in our guesthouse in Shaolin, we are surrounded by mountains down a small street, with just a few houses and a ping pong table. We are welcomed by a large bowl of noodles, which is just what I need after that bus! Then we have to prepare for our Kung Fu Lesson. The school is just down the road from where we are staying, its a boarding school for underprivileged children. These kids are from families all over the Henan province, maybe their families can’t afford to send them to school, or maybe they just can’t afford to look after them at home. Either way, if they are lucky enough to get the chance to study at a Kung Fu school here the opportunity should not be passed up.

The school here is a simple building with a small courtyard for training, a larger dirt field outside of the wall. First the students gave us a show. It starts off more like acrobats, flips and insane flexibility. Then the little monks get swords out, can you imagine that back home, some yr7’s jumping around with swords at school. Someone would hang for that. But these kids know what they are doing! The finale of the show is 2 finger press ups (if that doesn’t sound impressive, try it, I dare you!) throwing a nail perfectly through a piece of glass and popping a balloon the other side, the master showing his skills with a 50kg spear not forgetting the weirdest part, this little kid must have been 10/11 years old and he puts his stomach and organs into a bowl, somehow, then they put a pole through the hook on the bowl and pick the kid up, using nothing but the suction of all his flesh in this bowl…. I really can’t think of a better way of explaining it. Even now thinking about it I’m a little confused on how it happened.

The next day we visit the famous Shaolin temple, we hike for what seemed like hours to see a cave where a monk meditated for 9 years. 9 years is a long time for anything, but 9 years not speaking but trying to clear your mind to reach enlightenment. I hope he found what he was looking for! After the hike we have another Kung Fu show, this one is more famous than our little school from yesterday, but the skill level wasn’t that different and I quite liked the grass routes feeling I got from the little school rather than the tourist show at the Shaolin Temple.

Lei Lei is our guide in Shaolin, he’s a funny guy, full of energy, little round glasses like a Chinese John Lennon. He tells me during the show they will ask for volunteers, and I have to put my hand up, being the easily led peer I am I obviously agree. Turns out I am volunteering to be part of the show! There are 3 monks and 3 volunteers the monks go first and act out part of the show, spirit animals. A monkey, a frog and an eagle, obviously the woman tells me I’m the frog. Anyway the monkey goes first, the ‘monkey’ is a Chinese male of athletic build, he starts jumping around with ease, kicking the air and even manages a no handed cart wheel. I can’t do a handed cart wheel!! It’s a fix, how was I supposed to compete! My turn now, I start rolling around copying this monks rendition of frog life. Now comes the complicated bits where he is throwing his self around, I try to copy but I feel like a fish out of water. To be more precise I feel like a salmon diving up stream desperately trying to avoid the bears claws, but it’s too late. The whole ordeal ends with a bow between me and my 12yr old master and an applause of laughter from the audience! After all 3 attempts the host puts it to an audience vote to see who’s wins the contest… Obviously I have been out skilled by the secret Kung Fu master they put on first, and he knows it. What he underestimated was the love in my extended family within the Dragon trip. All 40 of them screamed their hearts out! Somehow I won the contest and I am now the proud owner of 3 hours of Shaolin monks on DVD! Priceless!

Visiting Shaolin was awesome, especially seeing the monks in their school, it’s great to see underprivileged children being looked after and achieving so much.

2 thoughts on “Shaolin – Kung Fu and my spirit animal”