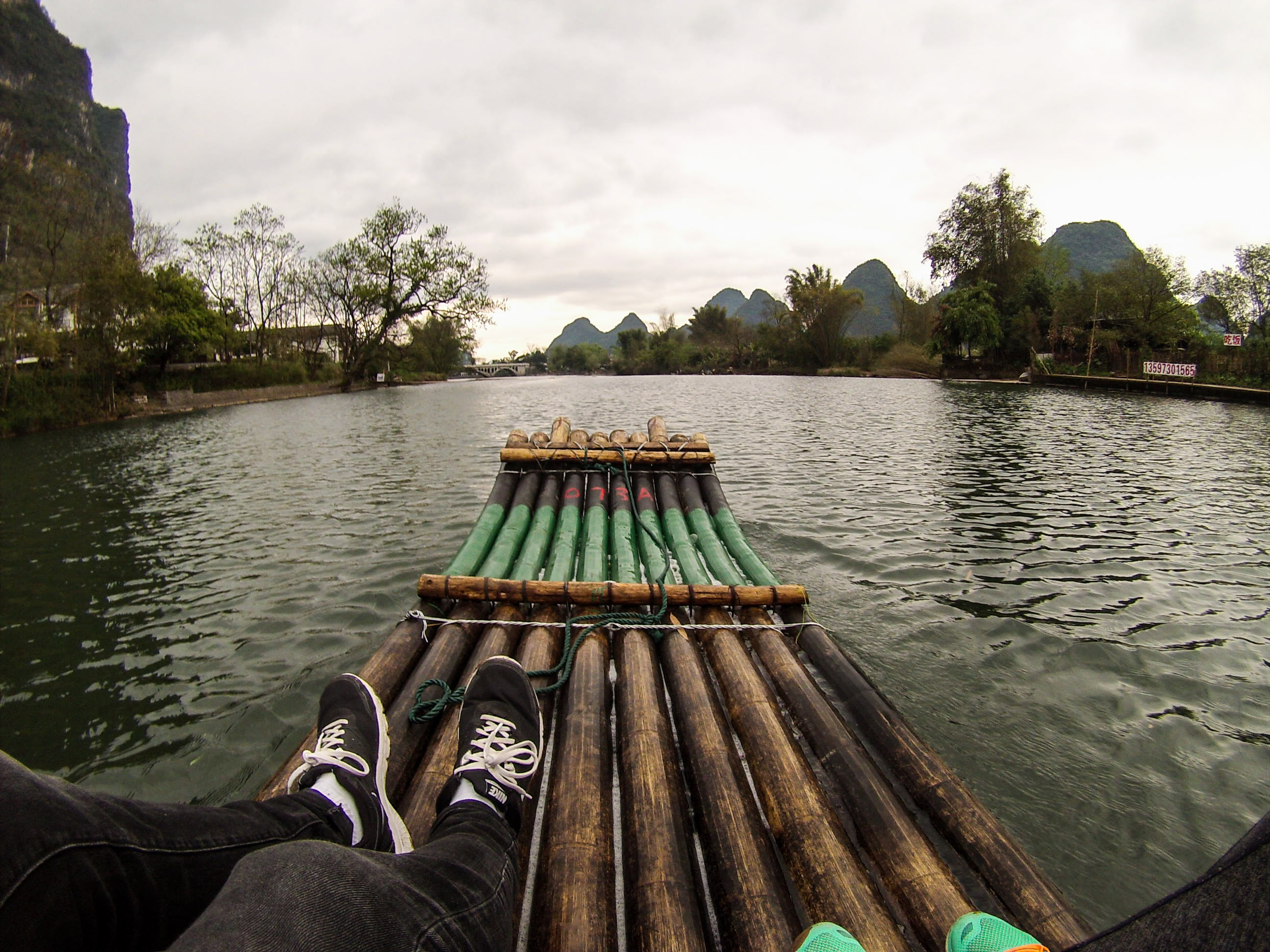 I have been in mainland China for 3 days, my back is covered in love bites and I have had more selfies and free drinks than I could count.

Yangshuo is a small city 5 hours travel from Hong Kong, just South of Guilin. Its situated in the Lijiang River, and home to the Karst filled photo on the back of the 20 RMB note. This is the first stop on the Dragon Trip and it has not disappointed.

The city is filled with friendly locals, fearless drivers and even braver pedestrians. After riding a bike on these roads for 5 minutes you relise it’s a free for all, survival of the fittest, or at least the one with the quickest reactions. Cars overtaking lorries with oncoming motorbikes, pedestrians running in between and cyclists filling the rest; I shouldn’t have been so shocked to see motorbikes using pedestrian crossings. After our introduction to the tour telling us that the most dangerous part of China is the trafffic, it only seems right that our first activity is riding bikes through it. But at the end of the fight for survival we get to go for a ride in traditional bamboo rafts down one of the smaller rivers that joins to the Lijiang.

One of the optional activities in this city is ‘hot cupping’ using suction to draw all the toxins out of your body into bamboo cups… Sounds like a load of waffle to me, but some things you just have to embrace. I also opted for a full body massage, it came to about 20 pound for the hour massage and 20 minutes cupping, not bad at all. After the most intimate, personal massage of my life, the cupping began. The woman puts a flame into a bamboo cup then quickly seals it on your back causing suction, and more discomfort than you could imagine. The more cups she put on my back the tighter my back became until I found it hard to breathe. After 2 minutes I felt like tapping out, all of a sudden I didn’t like china! After 5 minutes my breathing settled and I decided I have to stick with it. When the time was up the lady comes back in the room, the only way I can describe the removal is ripping, so there I was again biting onto the towel. It genuinely felt like she was tearing skin removing the cups from my back. It sounds like a terrible experience, but after I got changed I genuinely felt weightless. My body felt great and I felt a strange feeeling of estacy, I can’t tell if it was the hot cupping of if the masseuse used hemp oil. Now my back is covered in perfectly cirular love bites… Could be a good few weeks until my leapord spots disappear.

A night out was due with the guys I’m on the tour with, so we grabbed a few beers and played a bit of pool in the bar down stairs at the 131 hostel Then headed out. Since we arrived in mainland China we have caught the attention of the locals, taking secret pictures of us… Most not being very secretive, I guess they don’t get too many westerners around here. But as soon as we got into a bar it felt like all eyes were on us. 5 minutes after arriving we were stood at a table with a bunch of Chinese guys playing some kind of rock, paper, scissors drinking game with beers that they handed us. Everyone wanted to get up and dance with us on the podium, taking selfies with us and filming the whole thing. It wasn’t long before rounds of beers that we hadn’t ordered were arriving at our table, random people were buying us rounds of drinks. It was like we were local celebrities, it was one of the weirdest experiences of my life. Everyone wanted to shake your hand and toast a glass with you, and if you didn’t have a drink they gave you one. Yangshou wins, hands down, the most surreal night out I have ever had… So far.

There’s nothing like a 9 o’clock departure to go kayaking down the Lijiang River to cure a hangover. But the river is peaceful and the views were great. The whole visit was finished off with a visit to the village our tour guide, Sally, grew up in. This small remote farming village was surrounded by Karsts and cumquot orchards. Until the last 10 years all the houses in this village were mud brick houses and they only got running water to their new houses in 2012, before that they had to walk and collect it from the well. Puts things into perspective.

So to sum it up, Yangshou has great locals, great food, and a picturesque landscape, sadly it was misty for our whole stay due to rainy season, but still the Karsts we’re impressive. Sally was a great host and the hikes are tough, but worth it!

One thought on “Yangshuo – Cupping, karsts and celebrity treatment”